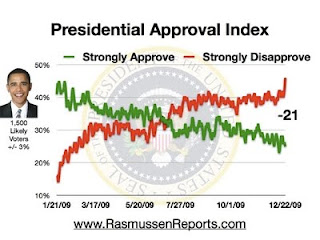 Let's go to Mr. Obama for his reaction: 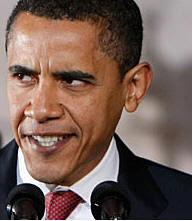 The (literally) Undocumented-Worker-in-Chief threatens Americans, prosecutes those who "mistreat" agents of the genocidal pedophile Muhammad, calls the Founding Fathers "potential domestic terrorists," and bankrupts and disarms the Republic.

Rather than treating our enemies in such a manner, instead he bows, embraces, surrenders, and apologizes to Leftist and Muslim tyrants.

It looks like someone's noticing.
From the quill-pen of your friendly, neighborhood Amillennialist at 1:08 PM

The foolishness of America's electorate, the treasonous malfeasance of its "leaders," the heroism of its warriors

A picture is worth a thousand 'blog posts.

Found at the great Diana West's site, a Muslim enjoys with a smirk armor, training, candy, and security bought and paid for with American blood and treasure, while the American goes to inspect an explosive-laden house.  As Ms. West notes in her post title, we get bombs.  They get lollipops.

Why wouldn't the Muslim laugh? His coreligionists -- his "people" -- maim, rape, and slaughter in Allah's name -- in obedience to its commands and in accord with Muhammad's example, including nearly three thousand civilians on 9/11 and several thousands of our best and bravest since then -- and what do we do?

Not a manly, morally-certain, full-throated, and vigorous self-defense as in the olden time. Instead of ushering the barbarians to their virgins-in-hell, we bow and apologize and bribe.  We pay them billions in jizya and blood, just as Muhammad commanded.

How can this do anything but embolden the enemy?

What began under President Bush as good-intentioned-but-suicidal wrongheadedness founded on chronic (and therefore inexcusable, for how can any American after 9/11, especially the one charged with the duty of defending our unalienable Rights against all enemies, foreign and domestic, be still so stubbornly unknowing?) and colossal ignorance of the texts, tenets, tactics, and timelines of jihad is now an accelerated demoralization and decimation of our military, led by someone who, raised and educated in Islam, must know that the Source and Sustenance of jihad are the commands of Allah and the example of Muhammad.

(If even an apparently-decent, obviously-Muslim-in-Name-Only Muslim living here since he was thirteen goes apoplectic when someone tells the truth about Muhammad from his own texts -- and he had only "some classes" back in his country growing up so he was "aware of some of that" -- how can the Allegedly Former Muslim, the "smartest president ever," not know?)

Our military are handicapped by the cluelessness (malfeasance?  treachery?) of its leaders: General McChrystal stated recently that our warriors are overseas not to kill our enemies, but to convince them.

How do you win hearts and minds devoted to Allah?

Lollipops will convince them only that we are idiots.

Ms. West sums it up well:


This AP picture pretty much says it all but just to make sure, let's read the original caption:


In this picture taken Tuesday, Dec. 8, 2009, an Afghan police trainee from the United States Marine police mentoring program eats a lollipop as Marines search a house that was thought to have explosives during a joint patrol in Khan Neshin, in the volatile Helmand province of southern Afghanistan....


And mass impeachment proceedings.  Remove them all from office.
From the quill-pen of your friendly, neighborhood Amillennialist at 6:22 AM